In honor of Black History Month and the contributions made by African Americans, here are curated files of African American Family History resources. These have been set up in digitally tabbed file folders–just select a tab and the file contents will be displayed.

LeVar Burton (Geordi La Forge of “Star Trek: The Next Generation” and Kunta Kinte of the 1977 “Roots” miniseries) gave a powerful keynote address at last year’s RootsTech. Maybe you had to be there or maybe you had to have lived in America in the 70s when almost every household, probably with an average of ten TV channels, tuned in to watch Roots. When parents were torn between “is this too graphic for the kids” and “is this too important to not let them see?” Burton summed it up perfectly when he said ‘one family’s story changed how America saw slavery’ and that every story mattered. Black History Month celebrates all African Americans. From the first African American president to the most humble slave narrative, every story matters.

Don’t have African American or slave ancestry? Consider donating some time helping index records at the US Freedmen’s Bureau. They need volunteers to extract names & ages & family members from all types of records and put them in appropriate birth, marriage, and death indexes. No one should have to look through deeds of sale to find their kin. 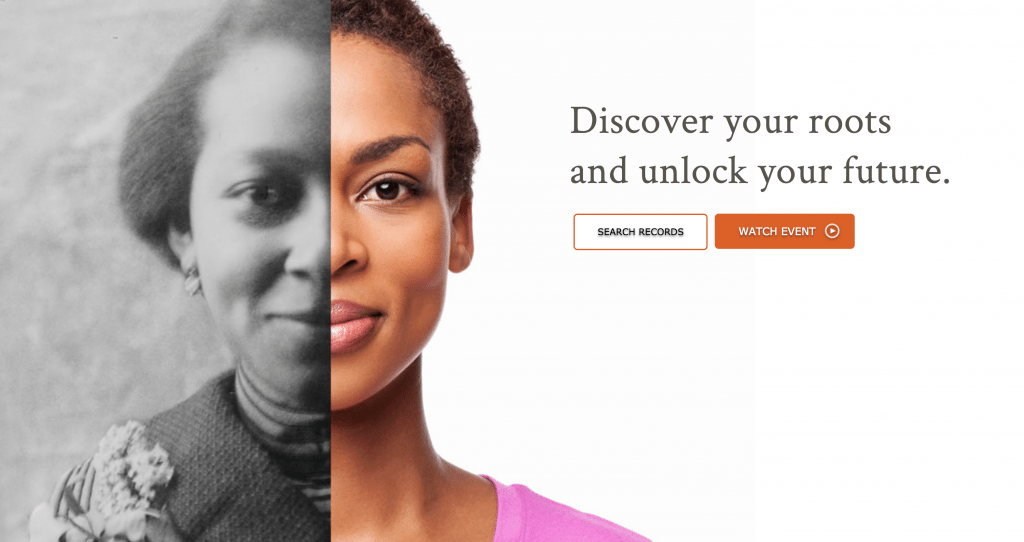 Some ideas for African American genealogy research include:

US FREEDMEN’S BUREAU – the US Freedmen’s Bureau has the best African American & slavery records and these records are being digitized and indexed but are only partially available online, new records are added regularly so check back for new and updated collections

MILITARY – Military records are great & Civil War pension applications are so valuable, they’re worth obtaining in their entirety 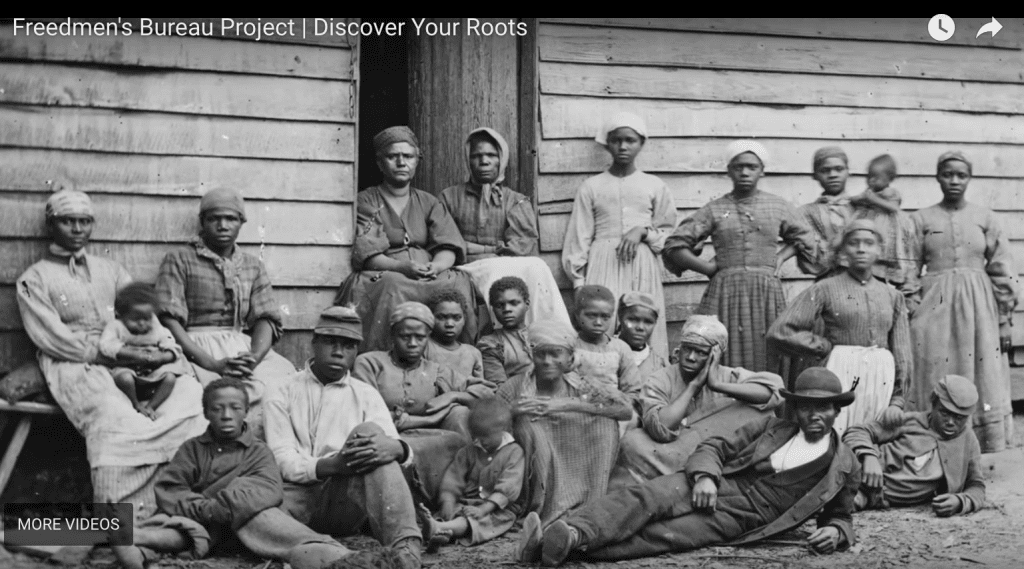 BEYOND INDEXES – if you don’t find what you need in indexes (where names have been extracted from all types of documents), you’ll have to steel yourself and master searching through property records, because slaves were not treated as persons, but as property; search slave insurance records, runaway slave newspaper advertisements, property deeds (slaves being some of the last property mentioned), loan collaterals, county taxes (noting slave owners), estate publications (estate value may be low even though they owned many slaves), court records/judgments, and any financial transactions

NETWORK – descendants of slave-owners may unknowingly hold family records, letters, etc. in their private collections that will unlock your past & you may have to navigate how to successfully reach out to them

CONNECT – most genealogists specialize in a locale or ethnicity, join social media sites and follow bloggers and genealogists who specialize in African American or slave research-the techniques you’ll need to master are different and you should let a professional be your guide

DNA – if you hit a brick wall, modern DNA testing with ethnicity, triangulation, & shared matches may be a necessary step in your research

THE NEVERENDING STORY – this list of resources will never be complete in any way and I haven’t added collections at subscription sites (unless I did so by accident); I absolutely will if it’s by request, but I personally hate anticipating a free collection and then hitting a paywall

US Freedmen’s Bureau, Records of Freedmen, 1865-1872 – birth, marriage, labor contracts, rations with locations where an ancestor lived and who slaveholder was, letters with great info

Slave Archival Collection (RootsWeb site at Ancestry that is temporarily down)

US Freedmen’s Bureau, Records of Freedmen, 1865-1872 – birth, marriage, labor contracts, rations with locations where an ancestor lived and who slaveholder was, letters with great info

African American Marriages URL is http://freepages.genealogy.rootsweb.ancestry.com/~janderse/marriages/   (RootsWeb site at Ancestry that is temporarily down)

The Friends of Freedmen’s Cemetery – Virginia

United States, Freedmen’s Bureau, Land and Property Records, 1865-1872   “This collection consists of images of land and property records created by the Freedmen’s Bureau for the years 1865 to 1872. … and may include Full name, Residence, Document dates, Ages, Description of property, Name of property owner, Names of other members of the family

Sankofagen Wiki – Plantation records for most states, site is redesigned but select a state or file name and then look at plantations and slave lists

The Great Migration: The African American Exodus from The South

United States, Freedmen’s Bureau, Records of Freedmen’s Complaints, 1865-1872  “Index and images of registers of complaints and other records related to civil rights complaints.” Person filing the complaint, the object of the complaint, action taken and the result of action.

United States, Freedmen’s Bureau, Records of the Superintendent of Education and of the Division of Education, 1865-1872 “Most of the collection will consist of monthly teacher reports and monthly reports of the sub-assistant commissioner or agents. The event date is the date the report was completed either by the teacher or agent. Reports can also identify the name and location of schools as well as the society sponsoring a teacher.”

United States, Freedmen’s Bureau Labor Contracts, Indenture and Apprenticeship Records, 1865-1872 “The collection consists of an index and images of employment-related records for the years 1865 to 1872. It includes labor contracts, indentures and apprenticeship records” and may contain “Given and Surname, Age and/or Birth Date, Death Date, Residence, Spouse Name and Birth, Race or Color, Occupation, Marriage Date, & Military Unit.”

United States, Freedmen’s Bureau, Records of the Commissioner, 1865-1872  This collection includes letters, denials of claim, endorsements, and oversight of the Bureau. Information may include the “Name of the freedman, Name of the freedman’s former owner, Date of the record, Birthplace, Residence, Age, & Document dates.”

First-Person Narratives of the American South “First-Person Narratives of the American South” is a collection of diaries, autobiographies, memoirs, travel accounts, and ex-slave narratives written by Southerners. The majority of materials in this collection are written by those Southerners whose voices were less prominent in their time, including African Americans, women, enlisted men, laborers, and Native Americans.”

Voices from the Days of Slavery “All known recordings of former slaves in the American Folklife Center are included in this presentation. Some are being made publicly available for the first time and several others already available now include complete transcriptions.”

Stanford University – Diary of a Contraband

DPLA – the Digital Public Library of American allows you to search across many US Libraries’ digital collections. A search of  “African American Obituaries” found 10 results, two of which were family bible records spanning 200 years with slave genealogies; a search for “Slave deaths” returned plantation ledgers with names of slaves and births and deaths for each slave family; searches for African American births, slave deaths, slave will, slave inventory, probate, land records, bible records, etc are ideas for more searches. (Remember to reset your search filters each time.)

How to Search at DPLA

ArchiveGrid is similar to DPLA and searches across more than 1,000 archival institutions. This link goes to a search for “Slave” records.

How to Search at ArchiveGrid

How to limit results to only FREE books at Google Books

Tips for searching at HathiTrust

Buffalo Soldiers National Museum – “BSNM is the only museum dedicated primarily to preserving the legacy and honor of the African-American soldier in defense of the United States of America from the Revolutionary War to present.” The Cheyenne Tribe Native American warriors gave the soldiers the nickname “Wild Buffalo” out of respect for the 10th Cavalry (African American soldiers’) fierce fighting ability. The name Buffalo soldiers stuck and became a generic term referencing all African American soldiers.

United States, Freedmen’s Bureau Hospital and Medical Records, 1865-1872 records may include “Name of the patient, Age, Sex, Date of admission, Date of discharge or death, Name and location of cemetery where buried, Estimated date and place of birth, Home residence, Marital status of deceased, & Names of family members”

Pictures of African Americans in WWII

Sankofagen Wiki – Plantation records for most states, site is redesigned but select a state or file name and then look at plantations and slave lists

Inspection Roll of Negroes Book No. 2; Records of the Continental and Confederation Congresses and the Constitutional Convention 1765-1821

The African-Native American Website A founding member of AfriGeneas, Angela Walton-Raji is a genealogist who specializes in African and Native American research. “Her great-grandparents were African slaves of Choctaw Indians, and that her Walton ancestors were among several thousand Africans who were enslaved by Native Americans, including those who migrated west on the Trail of Tears.”

Who is Nicka Smith? “Nicka Smith is a professional photographer, speaker, and documentarian with more than 18 years of experience as a genealogist.  She is the host of BlackProGen LIVE, a web show focused on people of color genealogy and family history.”

Our Black Ancestry by Sharon Leslie Morgan, a founding member of AfriGeneas and Diana Roman, a descendant of one of the largest slaveholding families in American history.

Georgia’s Virtual Vault “Georgia’s most important historical documents, from 1733 to the present.”

Institute of African American Research at UNC and Facebook Group

LegacyFamilyTree Webinars has a couple free African American genealogy webinars planned for 2018, and members have access to 13 webinars with handouts

The African Roots Podcast since 2009

Caribbeana volumes at Internet Archive – a few references to named slaves, use “Search Inside” feature to search a volume

Digital Library of the Caribbean – dLOC

A Guide to the Letterbook for the Simon Plantation, St. Kitts – authored by Samuel Cary. “Throughout the letterbook, Cary provides information about the African slaves owned by the plantation, listing about 300 at one point. He describes the shipping of slaves, the purchase of slaves, their labor and health, and the escape and death of slaves.”

A Guide to the Jeremie Papers – possibly including slave information

If you have a favorite resource to add, including your own African American blog or forum, please leave a comment on the OnGenealogy Facebook page and we’d be happy to include more resources. We’re still planning to switch to a new website soon and allow on-site comments and permit registered users to add resources to this site directly. Best in your research and enjoy Black History Month!