DNA Testing for Genealogy – Is It Worth It?

Twenty years ago, I wasn’t sure. Today, it’s a definitive “Yes.”

In the 1990s, BYU Professor Scott Woodward was in Egypt speaking about using DNA to study mummies when an Israeli researcher asked him about using DNA to test fragments of the Dead Sea Scrolls. The scrolls had been written on animal hides before they were torn. Could DNA testing identify which pieces came from the same animal hide and belonged to the same scroll? I saw the Dead Sea Scrolls on exhibit in Israel in 1995. The work of piecing together tiny fragments looked impossible and being able to match them by their DNA was an exciting breakthrough. Animal hides and document fragments was a finite enough collection that I could grasp the payoff. DNA testing made sense.

In 2000, Professor Scott Woodward had a microbiology lab at BYU and was paying $10 to anyone who would donate a DNA sample.  My youngest brother was a poor, graduating college student. His last day on campus he excitedly dragged me to Woodward’s lab to donate our four-generation pedigree charts with samples of our blood to collect the fee.

The goal of Woodward’s study was to use genetic markers to identify different populations in the world. It was preparatory work for ethnicity testing.  I was underwhelmed. The numbers that he would need for any results to be worthwhile seemed staggering. Paying off a few college students wasn’t going to cut it. I donated, but without faith in his project.

Around the same time, FamilyTree DNA started selling direct-to-consumer Y-DNA and mitochondrial DNA (mtDNA) tests. These were expensive tests that only traced your direct paternal (father-to-father-to father) line or your direct maternal (mother-to-mother-to-mother) line. Six years later, together with another testing company, they’d attracted 300,000 customers. The work was moving forward, slow as molasses.

Ten years ago, when 23andMe started selling direct-to-consumer autosomal DNA test kits (testing the non-sex chromosomes inherited from both parents) for ancestry testing, it still seemed like a long-shot because the numbers they would need to test, to make the results at all useful, were huge. (The accuracy of ethnicity reports, and revisions as greater numbers of people test, has been, and continues to be, DNA testers’ most vocal frustration.)

Fast forward to the present. AncestryDNA, MyHeritage DNA, LivingDNA, and other vendors have joined the effort and sell direct-to-consumer DNA test kits for genealogical purposes. But something has changed. In 2017, the number of people who purchased these types of tests doubled in one year. It took 16 years to get 6 million willing testers and then a single year to get another 6 million. They estimate there are currently more than 12 million testers.

DNA testing is now a viable method for connecting with relatives and tracing your ancestry. My DNA, tied to solid paper records of my ancestry, is a powerful tool.

Person A and Person B who match for one chromosomal marker can compare their paper records and see from their genealogy charts who their common ancestor is. Person X doesn’t need to have paper records. They only need to match us for the same single point of DNA we share. Person X gets a freebie ancestor. That’s game-altering technology. I can’t believe I’ve lived to see the day when DNA testing has come to fruition.

There are significant privacy concerns with DNA testing. They had the same concerns almost twenty years ago.

It’s hard to explain why someone who thinks it’s logical to use a camera-blocker on her computer camera, will so unabashedly give her DNA away.

For me, it’s about people. If my DNA helps people, who are looking for connections, find them, my potential loss of privacy is far outweighed by their potential gain.

There was a time when I didn’t see the point in DNA testing. It was costly and the benefits were far away in the hazy future.

But the costs have come down and DNA tests, coupled with time and brilliant technology, is paying dividends today.

Aside from health and medical DNA testing, which I’ll discuss in a different post, some of the people who stand to gain the most from DNA testing for genealogy include:

But they only benefit if we all test. A fatherless child can DNA test and offer their results to the mercies of the universe, but if no one else does the same, they have no hope of finding their parentage. They remain fatherless.

I can’t even fathom that loss of connection. I’ve always known who I am and the people I come from. I believe the studies that claim some of our deteriorating mental health is due to loss of connections with other people.

I was sitting in a room full of women I know and love and I opened a geeky app, “FamilyTree,” and told it to search for “Relatives Around Me.” It told me it was scanning the room for friends. No one else had the app open so it couldn’t find any relations. The app responded, “No friends found within 100 feet.” (Terrible word choice, Family Tree app developers.) 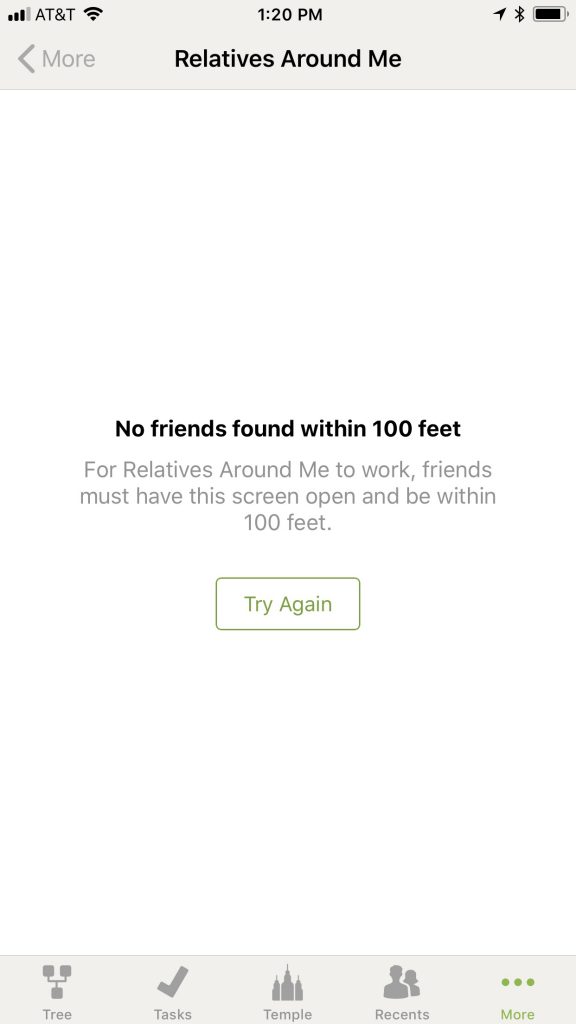 I felt a momentary sense of loneliness. Of not belonging. It was calmed by my knowledge these ladies were my friends and by my understanding that I HAD to be closely related to some of these people. I was sitting in a room full of Mormons, most of whom had married other Mormons for several generations AND whose ancestors practiced plural marriage. Between endogamy and polygamy, I was statistically guaranteed to be sitting by cousins.

Two people next to me laughed when I showed them the results. They downloaded the app, told it to search for “Relatives Around Me” and sure enough, they magically showed up on my app, both as my cousins.

The app image on the left is a cousin from a plural marriage (my mother’s mother’s line). You can see two wives married to one man. We each descend from a different wife.

In the app image on the right, my cousin and I descend from a husband and wife (from my mother’s father’s line, not Mormon lineage). 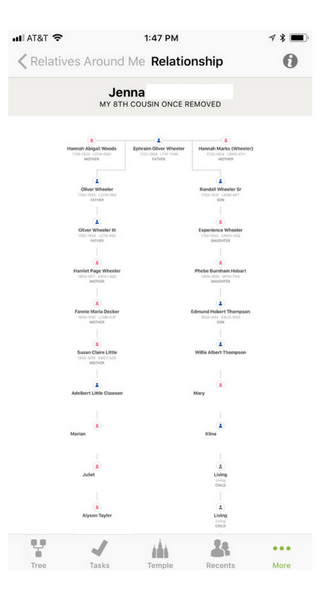 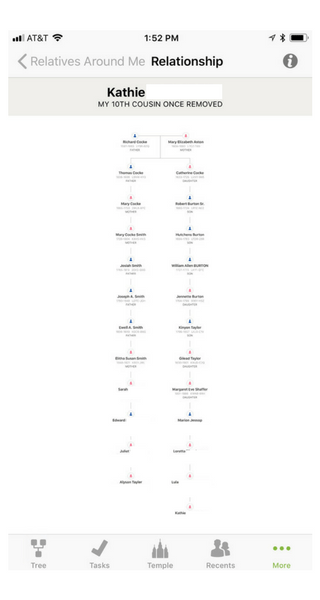 If you don’t have this same privilege, if you don’t interact with others, confident you are at least distantly related, how do you survive?

You know why I don’t flip people off in traffic? Because in the back of my mind, I’m confident we’re kin. I’ve done enough genealogy research that I feel connected to people, even when our ancestry is visibly different and distant. We’re all related. Having regular manifestations of this connectedness is my coping mechanism for life. What’s yours?

If your balance hasn’t yet been tipped to the “DNA Test for Genealogy” side of the scale, please don’t feel pressured by me or anyone else.

I personally think it’s only a matter of time before someone exploits my results. I’ve been the victim of identity theft with credit cards; I’ve had multiple friends with hacked email and Facebook accounts; I’ve received notices that my online digital information may have been breached. It’s a very real risk and I’m usually very logical and cautious. I’m testing because of an emotional tug and desire to help others. It’s a personal choice we each have to make for ourselves.

Twenty years ago I tested, having little hope it would do any good. Today I test, with a certain knowledge it will benefit society.

I just want to say thank you to the visionaries who have pressed forward, believing this day would come. It must have been isolating, for so many years having so few people share your dream. The eye-rolls, the small sample sizes, we truly owe you a debt of gratitude for pressing forward and making your dream a reality even we naysayers get to enjoy.

Below are affiliate links for the tests I’ve done:

AncestryDNA Test for Ancestry and Ethnicity

These are the three other tests I purchased at RootsTech because they had amazing conference specials. These aren’t currently for sale on Amazon but they’re available directly from the companies (for much more than I paid for them, unfortunately). These are full-price right now, but National DNA Day is April 25th and they’ll probably go on sale then.